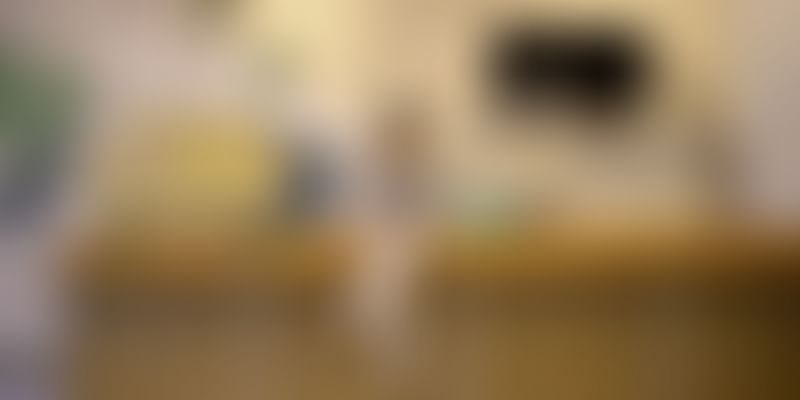 Every space tells a story. Just like our homes, commercial spaces should convey its purpose and philosophy through its design. Delhi-based architect and interior designer Aatika Manzar is helping her clients do just that. She is on a mission to convert vacant spaces into beautiful moulds through her crafty vision. However, living her dream through more than the 150 projects in her array was not always a cakewalk for Aatika.

“I had to face a lot of issues because of my eye, my tilted nose, and my lips as well. I did not look like other children and things were tough for my parents. I was looked upon as scary or unpleasant by school kids and children at the parks and malls,” says Aatika during a candid conversation with YS Weekender.

Aatika had issues with one of her eyes and was advised to take up a course that was “Easy on the eye.” This simply translated to not taking up architecture, a course that involves delicate detailing. However, Aatika was not the one to give up on her dreams. She underwent 29 surgeries and later pursued architecture from Jamia Millia Islamia and a master’s degree in interior designing from Birmingham City University in the UK.

In 2017, Aatika started her own design collaborative firm -- Aatika Manzar Designs. With projects including the Playboy Club, Freemasons Brewery, Bombay Bakery, Station Bar, and Modern Bazaar in her portfolio, Aatika has worked on projects ranging from hospitality, retail, design, residential, hotels, malls, and departmental stores. Aatika’s studio specialises in working proficiently in spaces both interior and exterior, and even large architectural areas with intricate details.

Aatika Manzar Designs boasts of being the only Indian design studio to have over 40 departmental stores in the country.

The Delhi-based inclusive book cafe, completely accessible for the differently-abled. The design includes ramps to provide access to the entire cafe in a wheelchair and navigation lanes with tac tiles for the visually impaired.

Born and brought up in Delhi, Aatika did not have a ‘normal’ childhood as per the book. “Certain physical deformities -- with my eye, nose and lips, make things tough for me at school. I was bullied and mocked by the boys because of which I had to change my school too. But since then, things have worked better for me,” Aatika recalls. The architect says that the constant support of her family and teachers have been her source of strength and helped her regain her confidence.

Aatika’s interest in sketching and mathematics led her to pursue architecture. Growing up with an elder sister who is also an architect exposed Aatika to architecture and got her interested too.

If not architecture and interior designing, Aatika says she would pursue fashion designing. “I loved everything about it...I had a good eye for aesthetics. My inclination towards mathematics also made me want to become an engineer, but ultimately, I combined all my interests and chose to be an architect,” Aatika says.

“I did not have any eureka moment, it was a process,” says Aatika when asked what led to the foundation of Aatika Manzar Designs.

Prior to starting up, Aatika worked with various firms that made her realise her love for architecture. “I wanted to take the leap of faith and start something of mine, keeping in mind that if I fail, I can always go back to working for someone else,” she says. In 2017, Aatika founded her design studio with a niche in commercial projects.

Being a woman in a male-dominated industry meant dealing with extra challenges at the workplace. “Initially, I was not taken seriously...I would not get the attention I deserved and clients would talk about calculations and structural issues among themselves...I had to initially take up a few projects to just build my brand. I would regularly pitch to clients,” she says.

By local artisans for the world: Why NYC brand Là Fuori is betting on slow fashion

Today, Aatika works on projects like clubs, retail stores, and restaurants. “I started loving the commercial projects because there are endless possibilities. I can experiment with colors, designs, and ideas because this industry needs uniqueness, and hence it gives me much more creative liberty,” she adds.

Aatika is appreciated for her projects including the Gaurav Gupta store in Emporio and the Farzi Cafe in Dubai and New Delhi.

Her latest project Merak is close to Aatika’s heart. The book cafe is designed keeping inclusiveness in mind. So much so, soap and towels in the washroom are placed in a manner that people on wheelchairs can use them. The staff is well-versed in sign language to help the deaf and mute. Even the book collection is accessible to all, with braille books collected from different libraries.

“Because I have dealt with similar issues in my childhood, and I still do at times, I was highly inspired to give back to society and make a design that could make everyone feel invited,” Aatika says.

Recently, Aatika Manzar Designs has extended its focus on residential constructions and has been working on the penthouse and high-end resolution projects. Next on her wishlist, Aatika wants to renovate an old haveli, a factory, or even an abandoned village site to convert it into a boutique hotel or restaurant.

“The concept is that of an adaptive re-use that ensures that the authenticity and the essence of the haveli or site are retained while it is put to better use,” Aatika explains.

“Just don’t give up on your dreams. You might face discrimination, be judged, and what not, but don’t let that stop you. Be passionate about what you want and you’ll eventually get it. Perseverance and hard work are the keys.”

Best of Weekender: From New Year celebrations to movies of 2020, and Obama’s favourite movies

‘My greatest regret is not becoming an entrepreneur in my 20’s because I considered it risky’, says Sanjay Swamy of Prime Ventures

Everything you need to know about diabetes and insulin resistance

COVID-19 and the ‘new normal’ for the fitness industry

Seven skincare products that you should stop using in the summer

I would like to come back as Joe Biden: Sudeep Singh, Founder of MPowered