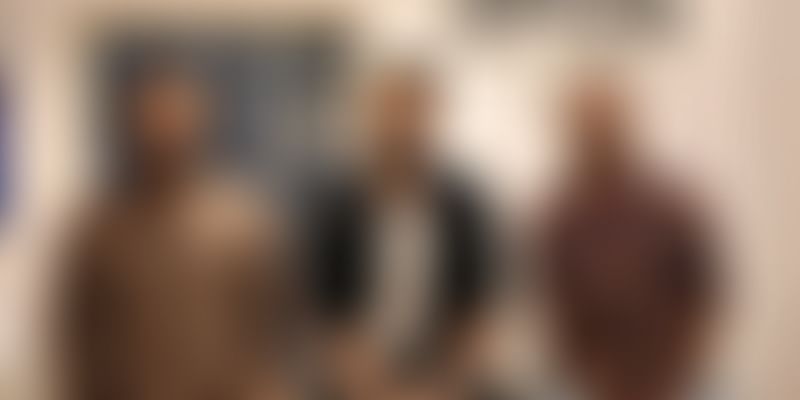 Delhi-based startup dmodot makes handcrafted leather footwear and has showcased its products at events like the Lakme Fashion Week.

Thirty-two-year-old Abhishek Sharma from Agra always wondered why designer and high-quality leather shoes are sold at exorbitant prices in India when the country has its own footwear hubs.

This gave him the idea to start up in the footwear industry. Abhishek launched dmodot along with his friends Suhail Dhaul and Pranav Sawhney, all in their twenties at the time, in 2014. The Delhi-based startup makes handcrafted leather footwear and sells it at affordable prices.

Abhishek says dmodot was started with the purpose of solving the footwear needs for self, which extended to creating a brand to solve the same problem for the like-minded community. “Good quality footwear was expensive and the available footwear in range was not appetising,” says Abhishek.

Starting from the boot of a car, the startup has been clocking an annual turnover of Rs 1 crore, and was also showcased at events like the Lakme Fashion Week.

From car’s boot to leather boots

Abhishek Sharma was in Pune while doing his engineering. During this time, he was looking to buy shoes, but unfortunately, everything available in the market was beyond his budget. Abhishek had always bought his footwear in Agra, his hometown, and also one of the top footwear production hubs in the country, which sold footwear at affordable prices.

Later, he went back to his hometown and got a shoe made for an affordable price. Looking at this, his friends also asked him to get shoes made for them.

Abhishek knew the footwear industry inside out in Agra, and also knew that India was producing some good quality shoes and exporting them to top brands in Europe and America. However, the same quality footwear was not available in the Indian market.

Abhishek knew the sources to get the shoes, and slowly he saw that more and more people in his college were asking for it. This is when Abhishek realised that this is an addressable market, and millennials want designer fashionable footwear for a lesser price.

Abhishek started selling shoes from the boot of his car in 2014 and delivered them personally to people. He then started the company as Dameriino, and roped in Suhail and Pranav to build it into a one-stop Made in India shoe brand for aspirational millennials. The company rebranded itself to dmodot in 2016. The startup now has a team of 10 people.

Dmodot says it competes with international brands selling designer footwear such as Steve Madden, Ecco, and Ted Baker, to name a few. But Suhail says that a mid-segment for designer footwear has never existed in India. “Either you buy expensive brands or you have some vanilla options if your budget is low,” he says.

“We aim to make people stylish with great quality footwear at an affordable price. To be precise, we are an affordable luxury brand footwear,” says Suhail.

The company makes shoes for both men and women and the products are priced between Rs 3,500 and Rs 9,000.

Speaking about how the company is able to offer products at lower price, Suhail says that since dmodot is an online store, it helps the company manage with a lean team of 10 and saves cost of a brick-and-mortar shop.

“Online presence helps us to reach out to the right people,” he says.

“We believe that the best publicity is word of mouth, and if the product is good, the review travels on its own. This exercise helps us to keep our foot grounded and keep the costs under control,” he adds.

In terms of marketing, the company collaborates with leading designers, bloggers, and influencers, which helps dmodot reach its target customers.

A ‘Made in India’ brand

Abhishek highlights that the company is focused on taking care of the needs of Indian customers. “With a wide array of offerings from Oxfords, Brogues, Monkstraps to ethnic styles like Peshawaris, Juttis, and Mojaris, we make sure that we are a one-stop shop for all customers’ needs,” he says.

This homegrown shoe brand is competing with Woodland, Clarks, Cole Haan in the premium men’s segment

Abhishek claims the startup differentiates from its competition by being able to make timeless styles with a modern touch. Besides footwear, the startup also makes accessories like wallets, belts, passport holders, etc.

Speaking about the process of how a shoe is made at dmodot, Suhail says the brand is completely Made in India by local artisans. He adds the designs are done by in-house designers along with the founders, and once the designs are ready, the company gets a sample made, which is first checked for comfort and quality.

“After the rigorous process of testing the styles and incorporating the proposed changes, a production sample is made in our workshops by skilled artisans,” adds Suhail.

“We believe the quality of craftsmanship of the Indian artisan is unparalleled and hence we have chosen to make in India,” he adds.

The startup makes revenue from its online store, and through online marketplaces such as Tata Cliq, Indiluxe, MensXP Shop, Amazon.in, AZA, etc., and through collaboration with bespoke menswear stores.

Dmodot also has a small retail store in Delhi, which also adds to the revenue.

In terms of revenue, the startup clocked Rs 1 crore turnover in FY19, and is looking to double it in FY22. Abhishek says the revenue for FY20 was affected due to the nation-wide lockdown but is now reaching to pre-COVID levels.

According to the founders, they have invested around Rs 60 lakh into the company to date from their personal savings, and through family and friends. Going forward, dmodot plans to raise funding to support its plans for scaling.

“We are looking to partner with strategic investors to help us accelerate our growth and reach more customers through quirky marketing strategies and new product ranges in the footwear segment,” says Suhail.