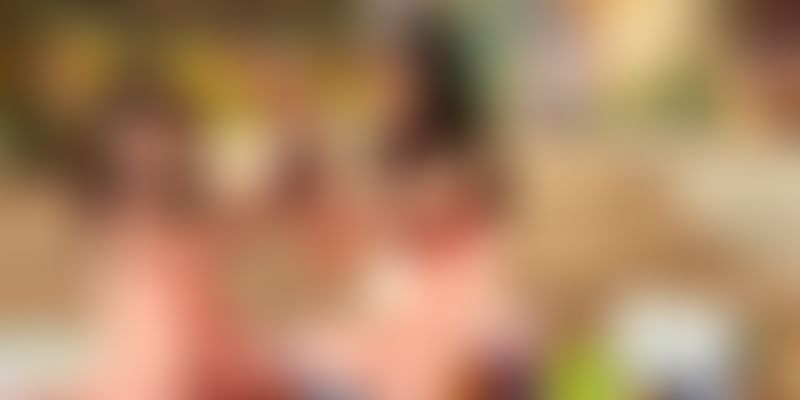 Concerned about the safety of art products for children available in the market, two mothers in Bengaluru quit their corporate careers to make toxin-free paints, crayons, and art kits for the zero-six age group.

Karen Saldanha and Neha Bajaj set up their startup Dabble in May 2018 to manufacture art products from organic materials.

“Our crayons are made from organic beeswax and come in fun shapes that are easy to grip and don’t break easily like other crayons,” says Karen. “We have also applied for a patent on our unique formulation.”

She says that many crayons available in the market are made from paraffin wax, a byproduct of petroleum, and hence brittle. “They also take about 100 years to break down and lower oxygen level in landfills.”

Dabble’s resolve to make non-toxic products also comes from the fact that its team of five are all mothers, says 42-year-old Karen.

Each product, she says, is developed with support from a team of chemists and food technologists, and tested at a laboratory certified by the government body National Accreditation Board for Testing and Calibration Laboratories.

The story behind The Moms Co. and its toxin-free products for expecting mothers

The co-founders met at an expressive art therapy course they took up in Bengaluru. While pursuing it, they became close and even gave birth just four days apart.

Karen and Neha were both sourcing art products for their children from abroad and realised the need for safe options at home.

“We had common ideologies on raising kids and art had a special place in our hearts and in our homes,” says 39-year-old Neha. “That is when the idea was born: Why safe art only for our kids, why not for the children of the world?”

The next question was: “How about making our own crayons?”

The pair then spent months researching crayons, natural waxes, and the first experiment was conducted in Neha’s kitchen.

“We created our first crayon in August 2017,” says Neha. “One of our common friends let us use her outhouse for research and experiments.”

Several months were spent developing products and letting their kids and those of friends test them. Gradually, business ideas developed and Dabble was started in May 2018 to “bring innovation and safety in products for the early childhood segment”, says Neha.

“Soon, we commissioned a team of scientists and food technologists specialised in developing child-friendly products,” she says. “At every stage, the products were reviewed by a team of experts, speech therapists, art teachers, and early educators.”

Besides safe paints and non-toxic crayons, Dabble has introduced a category of products called PlayArt, in which crayons come in different shapes such as animals and cars. Neha says the startup is also bringing the trend of finger paints to India.

“The sensory experience of playing with paints is not only fun, but also has benefits in terms of cognitive, motor, and language development,” she says. “Our finger paints contain coconut oil and sweet orange oil, which create a multi-sensory stimulation.”

Karen had earlier worked with ICICI Prudential in sales, learning, and development for around a decade. In 2010, she joined IIM Bangalore’s women entrepreneur programme.

After the programme, she started a corporate training practice. Shortly afterwards, she felt a need to use the arts as an expression in her work. It was then that she joined the one-year expressive arts therapy course.

Neha worked as an advertising and editorial photographer for more than 12 years. But after this, she did not feel the same excitement at work any more. She decided to pursue art therapy and chanced upon the expressive art therapy course, where she met Karen.

The crayons and colours market in India is dominated by brands such as Faber-Castell, Cello, Camel, and smaller companies such as Xingli, Toykraft, ArtBee, Azafran, Re-Play, and Jirax that sell non-toxic crayons similar to Dabble.

The startup’s products, priced in the range Rs 400-2,000, are slightly costlier than those of other brands.

However, Karen says Dabble’s “real competitor” is the screen. “Our indirect competition is passive entertainment through screens, which means children do not expend energy imagining.”

Dabble’s other selling point is that its products are made in India. They are available on its website, as well as ecommerce platforms including Amazon.

According to Karen, the startup has acquired more than 7,000 customers in less than two years.

She says that despite the pandemic and the lockdown last year, the startup is looking to achieve 100 percent sales growth and an operating margin of 25-30 percent in 2021. The business is profitable and broke even at the end of its first year, she says.

Initially, Karen and Neha had put their savings of a couple of lakhs into the business.

“In the last one year of operations, our sales growth has helped us fund our working capital requirements,” says Karen.

Dabble has won an award for social impact and innovation from the Information Technology, Biotechnology, and Science and Technology Department of the Karnataka government. The award came with a grant of Rs 25 lakh for product research.

The startup is also getting incubated at the NS Raghavan Centre for Entrepreneurial Learning, IIM Bangalore.

Karen says the grant will help Dabble scale this year, add more products, and focus on online distribution. The startup plans to expand its team to about 20 in the next two years to fuel growth.