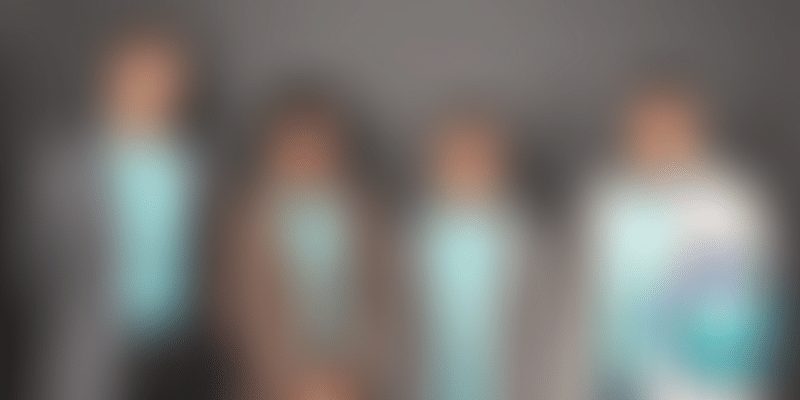 A product roadmap clarifies the why, what, and how behind what a tech startup is building. This week, we feature Bengaluru-based crypto currency exchange Unocoin, which enables users to buy, sell, store, use, and accept Bitcoins.

For close to five years, blockchain and Bitcoin have been the core focus area for several techies and companies. The problem is visible: amidst the cracks in the traditional banking system, with many losing money in international transactions, cryptocurrency seems like a viable alternative.

This was something that drew Sathvik Vishwanath to Bitcoin, the world’s first decentralised, open-source digital currency and payment network. As a freelancer, he faced the problem of international banking transactions and was looking for ways to ensure that he didn’t lose money. He would go for several bitcoin meet-ups, where he met Harish BV, Abhinand Kaseti, and Sunny Ray.

In 2013, this pain point led the four to start Unocoin, an online platform that enables customers to buy, sell, and transact in Bitcoin and Ethereum.

The platform also raised an undisclosed amount as part of its ongoing Series A round from the likes of Tim Draper in October 2020. It will use the funds to further product development, grow existing infrastructure, and acquire tech talent.

The team took a scientific approach and started tinkering around on the edges of technology: mining, physical Bitcoins, conferences, etc. The greatest pain point then emerged: it was nearly impossible for Indians to buy and sell Bitcoin easily and safely.

“And we set out on a path to address that with India’s first Bitcoin platform. We launched it in the Global Bitcoin Conference, the first Bitcoin conference in Asia, and saw 500 signups in the first month. This demonstrated the need and spurred us on.

“We focused on making the platform simpler to reach a wider audience and integrated with Netki to make it easier to send Bitcoin to friends and family. With these initiatives, we realised the appetite that Indians had for engaging in exchange markets and eventually launched other crypto assets as well,” Sathvik says.

The first Bitcoin buy-and-sell offering was simple and built in less than three months. A few programmers crafted the initial prototype and the co-founders bootstrapped the company. They witnessed traction almost immediately - people started buying Bitcoin on the platform from the first day.

The platform was the first of its kind, offering an integrated wallet, a built-in KYC procedure to prevent fraud, integration with banks, best-in-class security, and friendly and prompt customer support.

Understanding the use cases

The team realised that one of biggest use cases of Bitcoin is as a form of digital gold. The scarce nature of Bitcoin (a limited supply of 21 million) along with its open source nature and the fact that it has outperformed every asset in the world has intrigued many people.

“We put the needs and desires of our customers at the centre of our evolution and realised that buying and selling Bitcoin was not sufficient. Bitcoin is many things to many people - to some it is an investment, to some a remittance; some see it as a method to make payments,” Sathvik says.

Investors were concerned about volatility and the crypto startup introduced the systematic buying plan (SBP) to address that. Freelancers were worried about time differences and payments basis that, and so we introduced auto-sell. Bitcoin’s fast and slow transactions makes it ideal for e-commerce platforms to accept it.

"We designed a revolutionary mobile application that could produce an invoice against the Bitcoin payment, have it converted into rupees, and deposited into the user’s bank account,” Sathvik explains.

The co-founder says they designed and kept improving the product, keeping the user at the centre. The team ensured a simple user interface – since Bitcoin is a complex technology, they focused on simplifying it.

“As it is a financial technology, we needed to have KYC verification, the wallet, integration with banks , and several other key elements. The more we simplified and made our platform user-friendly, the more users we acquired,” Sathvik says.

The cryptocurrency startup also launched iPhone and Android apps, which widened its user base and was a step forward in serving the masses. It was then made scalable and secure to ensure that customers had “a trusted place to buy and sell Bitcoin safely and easily”.

By 2017, the platform had started seeing nearly 2,000 transactions daily, with equal numbers of Bitcoins sold and bought every day. It had over 3.7 lakh unique customer logins.

The next few iterations of the product saw it offering customers a systematic buying plan to help hedge risks, and invest gradually over a stipulated period of time. By the end of 2017, Bitcoin and other cryptocurrencies had started hitting daily record highs. In December, Bitcoin touched $19,783, its highest price ever, so far.

“The first product is still in use and is the focus of our company. We have added myriad features and tools to ensure that different users are served maximally, but our core offering is very much intact,” Sathvik says.

Customers provide feedback by writing a support ticket and, based upon the request, techies try to identify what customers want next. For example, based on user feedback, Unocoin launched an order book exchange with multiple crypto assets that target more sophisticated traders.

The systematic buying plan enables them to automatically buy a small amount of Bitcoin, every day. As services were designed around financial transactions, the startup also maintains a toll-free number for customers.

Unocoin also came up with a slew of solutions to make it easier for merchants to accept Bitcoin.

“A few years ago, when we started onboarding 10,000 users a day, it became apparent that we needed to build a much more robust and scalable platform and so we did. Our platform today can serve orders of a huge number of users and we are constantly evolving by building new solutions such as lending and interest earning products,” Sathvik says.

Luckily, Bitcoin has little to do with legacy systems - it’s brand new, which is one of the things that excited the team. One of the major challenges the team faced was regulatory challenges and interfacing with law enforcement.

However, things started going downhill in October 2018. The company had set up a bitcoin ATM in India, the country’s first such machine, but the ATM had to be removed. India had taken a hardline stance against the unregulated crypto space, and tried to squash all trading operations.

Sathvik, himself, was sent to judicial custody. By then, the startup had already inked deals with close to 45 banks and had started allowing users to recharge their BookMyShow wallets, phones, or DTH boxes using cryptocurrencies.

After being embroiled in a legal battle for 22 months with the RBI, the IAMAI was finally able to win a case in March this year, which allowed Unocoin to start providing bank deposit and withdrawal services to its customers.

“The lack of clarity gives many people the impression that our industry is ambiguous, but we go to great lengths to ensure that people are informed and educated. The technical complexity of the Bitcoin system warded off a lot of users initially, but we kept up efforts to show the average user the benefits and workings of this technology so that they could trust it,” Sathvik explains.

Unocoin has 28 employees, and the engineering team comprises mobile and web developers. To raise awareness and for educational purposes, the team has provided tutorials in more than 10+ Indian regional languages.

‘We were able to do this because of team members who could transcribe and create voiceovers in various languages,” Sathvik says.

The team also would host regular Bitcoin meetups before they launched Unocoin. This gave them insight and feedback from real-life users.

“Every addition we make to our infrastructure is kind of a eureka moment as it comes from addressing pain points such as merchant gateways, mobile top-ups etc. The case of auto-sell is interesting because there are lakhs of freelancers in India working for corporations in the US. They were getting paid via costly remittances, which involved high exchange rates,” Sathvik says.

The team started promoting Bitcoin as a method for individuals and merchants to accept payments, but time differences and volatility proved to be barriers. That prompted them to introduce auto-sell, which generates a unique deposit Bitcoin address that automatically sells the Bitcoin and deposits rupees into the user’s bank account at any time of the day.

Another eureka moment was when the team met a renowned lawyer who was knowledgeable about Bitcoin and had a team to study and monitor innovation technology and possible rules and regulations as per the law of the land. This was unheard of in 2013.

Sathvik says their referral programmes have shown results since the inception of Unocoin. Users can refer the platform to friends and family members and earn a bonus of 15 percent on transaction fees.

He says the startup believes in engaging with their community and is quite active across social media platforms. The team recently launched Unoversity.com, a crypto-asset education portal that educates people with free courses about Bitcoin and other crypto assets.

Speaking of future plans, Sathvik says, “We are really excited about some of the innovations around Bitcoin such as the lightning network, liquid, cash, smart contracts on Bitcoin, core development, etc. These are the areas that we believe that more people need to focus their attention on.

“It’s easy to get swayed by new and shiny projects, but we should keep in mind that Bitcoin got all this started and is quite possibly more important now than ever before. Even public companies such as MicroStrategy have announced having acquired $500 million in bitcoin. This is a very bullish sign; the world may be warming up to Bitcoin.”