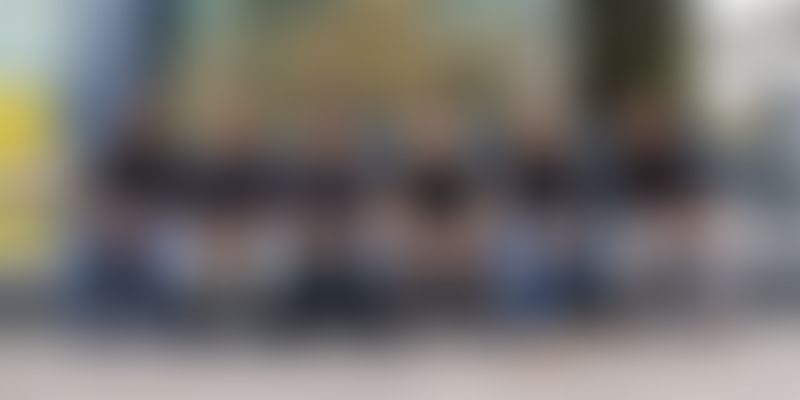 Nilesh R Bothra and Huzaifa Hararwala, roommates while at Sinhgad College of Engineering, were always keen on the idea of electric vehicles.

Nilesh, a production engineer, considers the automotive world to be his Mecca while Huzaifa is a computer engineer with expertise in computer networking.

Their mutual love for automobiles and engineering-led them to start Mumbai-based e-bike startup Calamus in 2017.

The e-mobility startup claims to builds the world's safest and most advanced e-bike, or ultrabike. It comes with GPS tracking, multiple anti-theft features, integrated support for Android apps, rider profiles, and real-time self-diagnosis.

It’s also equipped with ultrasonic sensors that provide blindspot assistance and handle grips that vibrate to warn you about approaching vehicles.

The journey to building Calamus took a while.

In college, Nilesh had already started up with 12C, a startup that developed and designed carbon and glass fibre parts for racing cars. This gave him exposure and knowledge about manufacturing and building for automobiles. However, he had to shut shop as he was graduating from college, and wanted to get further industry experience.

Before starting Calamus, Nilesh worked for Rolls Royce while Huzaifa worked and contributed towards the open-source Mozilla Foundation.

Their initial idea was of a vehicle that would serve people who could not afford any form of motorised transport and would be as sustainable as possible. They zeroed in on a bamboo electric bike, and this thought led to the inception of Calamus.

Why these ISRO engineers decided to start an EV startup

“Moving forward, we realised bamboo isn’t the most efficient material to use when mass producing e-bikes. Also, we wanted to do something innovative in the e-bike industry. For that, we had to target the more developed e-bike markets in the world: EU and North America. That’s when we decided to crowdfund our idea on Indiegogo where we received pre-orders worth $512,000 from 27 different countries,” Nilesh says.

The two-member team initially worked out of Nilesh’s home, but soon moved into a co-working space. The now 14-member team, which includes many of the founding duo’s college mates, was soon incubated at thinQbate at the end of 2017.

Nilesh explains they were part of the team that participated in Formula Student events where they had designed, engineered, built, and raced a smaller scale Formula 1 prototype car.

“We had participated in Formula Student events in Japan and Italy, and became the first Indian team to win a Formula Italy event in 2015.”

“We use innovative features like blindspot assist, GPS tracking, smart user profiles, which makes Calamus One the world's safest and most advanced e-bikes,” he says.

An e-bike, also called a pedelec, is usually a bicycle fitted with an auxiliary electric motor that runs on a battery. Calamus Ultrabikes are fitted with brushless DC motors in the crank of the pedal. This configuration is known as a mid-drive motor, as opposed to hub motors where the motor is located in the hub of the wheel.

“Calamus Ultrabikes have an integrated and seamless design. The cables run seamlessly through the inside of the frame that allow for cleaner and stealthier design language. The technology addresses rider safety, bike theft security, and connectivity,” Nilesh says.

The self-developed blindspot assist technology warns you of oncoming traffic. The multi-layered theft protection includes a smart lock that sends notifications to your phone and an accelerometer that warns you if someone is tampering with your bike. Live updates can be seen on your phone screen and the fingerprint-enabled bike screen.

The company has a design patent and two pending utility patents for the e-bike.

“The first batch of orders is being manufactured in China and Thailand right now, and assembled in India. They will be shipped in October 2020,” Nilesh says.

The market and the future

The e-mobility market, including cycles, bikes, motorcycles, and vehicles, is fast growing.

Despite the roadblocks, the NITI Aayog’s Electric Vehicle Mission 2030 is giving startups in the space a boost. It projects a $300 billion domestic market opportunity for energy storage companies.

He adds Calamus’ biggest market is Germany and their clients are mainly from the US and Western Europe.

For any hardware startup, the initial margins are lower because of early investments in manufacturing tools, moulds etc. For Calamus, the margins in 2019 were around 17 percent. They have grown to 38 percent in 2020 and are expected to grow to over 45 percent in 2021.

On future plans, the startup claims to be an EV company creating the next generation of personal mobility vehicles.

“The technology we are developing right now will be part of the entire range of vehicles in the Calamus ecosystem. Our goal is to take Indian innovation and development to the global stage. Over the next couple of years, we plan to shift our entire assembly and manufacturing to India. Our ultimate goal is to develop India’s first hypercar,” Nilesh says.