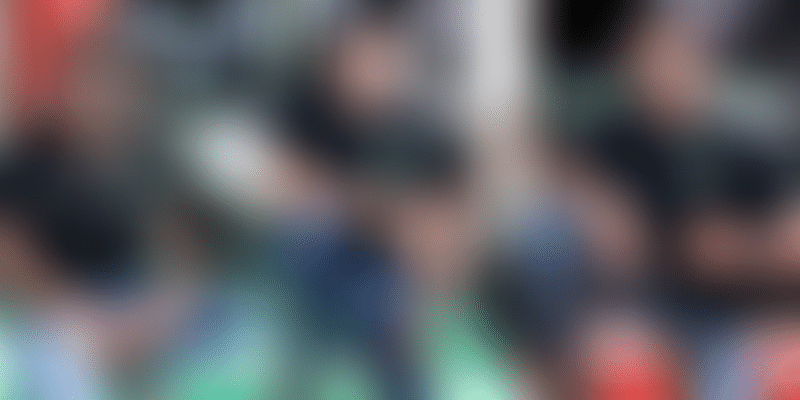 In this series, YourStory goes ‘Behind the Scenes’ to understand the workings of some of the most intriguing tech startups in the Indian ecosystem. In this edition, we profile Bounce, the Bengaluru-based bike-sharing platform.

Entrepreneurs Vivekananda HR, Varun Agni, and Anil G were quick to figure out what pressing problem needed immediate solving. While they began their journey with Wicked Ride, a bike rental startup, in 2014, seeing the growing traffic congestion problem, the entrepreneurs launched Bounce (formerly Metrobikes) in 2016, as a bike-sharing platform. Today, the Bengaluru-based startup is valued at $520 million.

“India is a country of over a billion people, and public transport just hasn’t scaled to the size of the population. It has led people to buy two-wheelers and four-wheelers,” says CEO Vivekananda, sitting in his airy office at the Bounce headquarters in JP Nagar, which is close to the Metro line.

Bounce’s trademarked yellow scooters dot different Metro stations across Bengaluru and Hyderabad. A few weeks back, the startup launched its electric bike service in Hassan, which is 180 km from Bengaluru. Bounce had introduced e-bikes in its fleet in Bengaluru in 2018.

Bounce, which has raised $207 million in funding, has a fleet of 19,000 scooters, clocked over 10 million rides in a year just in Bengaluru and Hyderabad, and has hit the jackpot of 120,000 rides per day in Bengaluru alone.

The startup operates both in the docked and the dockless space, with presence in over 35 cities with the former, and in Bengaluru and Hyderabad with the latter.

The dockless model allows you to pick up a cycle or a bike from any of the locations the startup operates in, unlock it with your phone, use it, and then drop it off at the nearest location. To the user, this looks simple enough, essentially done in a few, quick steps. all at the click of a button.

YourStory speaks to Bounce founders to see all the painstaking work that goes on behind the scenes for the startup to ensure its last-mile connectivity service is running smoothly.

[Behind the scenes] Into the nuts and bolts of Yulu, the dockless bike-sharing platform that offers an easy and breezy ride

Smoking out the market

When the founder trio first had the idea of focussing on last-mile mobility, the Metro line had just opened up in Bengaluru. “We realised bikes would have the easiest transition, considering India has the highest two-wheeler-owning population,” says Vivek.

In the beginning, the founders funnelled the revenue from Wicked Rides into leasing a few scooters and placing them at the Baiyappanahalli Metro station. They then took on a feet-on-the-street approach with people helping spread awareness and booking rides for users. They also worked with people in Whitefield to collect the keys and bikes.

This was an exercise in figuring out the need in the market. And the response Bounce saw had the founding team convinced that there was indeed a problem to solve.

Next came the business of figuring out the key component, which the team realised would cause some inefficiencies.

“We looked at the different options available in the market. There were docked systems, which allowed users to unlock a vehicle from a particular area and drop it at specific docks. But that meant a lot of infrastructural investment. You need to build the docks and include wires. We were keen on building a wireless mechanism,” CTO Varun explains.

The team then spent time looking at different wireless and dockless solutions, but nothing really stood out.

“We wanted a system that tracked the whereabouts of the vehicle, could gauge the speed, check fuel, and also have a system to thwart theft and damage if the need arose,” adds Varun.

How does it work?

Next came Bounce’s efforts to incorporate internet of things (IoT) in its technology. Varun explains that they started working on a system that could be added onto the scooters, connecting the vehicle to an IoT device.

The device was initially built to read the speed and temperature. The team then decided to build systems that would stop people from pilfering petrol and vehicle parts. “If you try moving the vehicle without unlocking it using the app, then there will be an immediate alert,” adds Vivek.

The bike-sharing platform works like any vehicle rental system. The user logs in, registers, and keys in their licence details. Once done, they are assigned the nearest vehicle that unlocks when the user types in a code provided by Bounce on the dashboard.

“The app tracks and traces the vehicle and even gauges the level in the petrol tank,” says Varun, adding that each Bounce bike helps remove approximately 6.5 bikes off the roads.

The founders note that Bounce has helped save roughly 11 million litres of fuel in the city of Bengaluru and reduced CO2 emissions equivalent to planting 1.1 million trees.

Teething issues and overcoming them

In the initial days, everything was up and running in the startup’s lab but there were some bumps along the way when Bounce did its first road tests. For one, the IoT device had started consuming a lot of battery and required longer battery life. Then there was the problem of overheating, as the IoT device grew hot quickly on use.

“We quickly went back to the drawing board to test what was wrong and fixed it using algorithms that would immediately check the heat signatures and battery life of the devices. The ops team would be notified if any immediate attention was needed,” explains Varun.

The operational team is also notified when a bike is far from their pickup trucks or needs to be picked up, and when there were any dangers to the vehicle health. While this doesn’t completely ensure the safety of the vehicle it does provide some checks and balances.

[Behind the scenes] Here's how Cure.fit plans to reach 100 million users in 10 years

Though the dockless option is fast-growing, Bounce is present in 35 cities with the docked variety. The founders say they have no qualms in taking their time to expand the startup’s reach.

“The first few months we were running on the fumes of what we had from Wicked Ride. Till we got our VC backing it was a stressful period every day. I am grateful and thankful to my team, which stuck around,” says Vivek.

Today, the team is working on R&D to check different ways to build and take its dockless systems deeper into the country. It has also launched its electric vehicle fleet in Bengaluru and Hassan, and will soon be operational with a fleet across India.