How Bharti battled abuse and poverty to counsel over 17,000 girls against sexual abuse 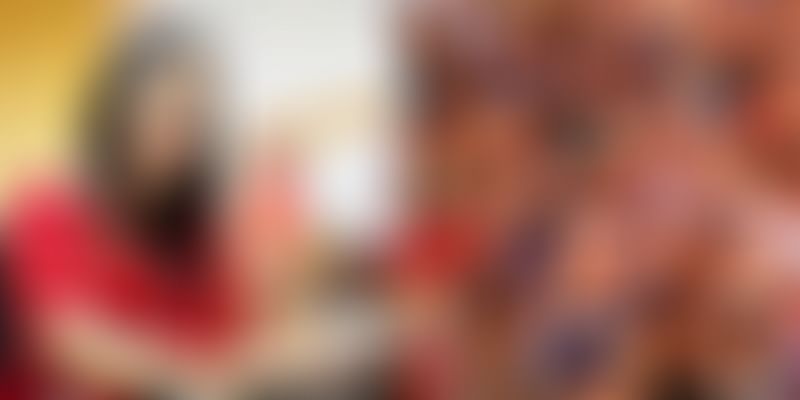 36-year-old Bharti Singh Chauhan was born into a conservative family that had migrated from Rajasthan to Bengaluru. Her father ran his own small business and made a decent living in the city to support the family. Fate, however, had different plans for them.

When they married, Bharti’s father was 35 and her mother was 16. They didn’t have any children for the first fifteen years of their marriage, and had adopted a relative’s son. Bharti says,

“Our relatives happily gave away their child as he would inherit my father’s property. But after I and my younger brother were born, they took him away and ended all the support my father had from the community. Overnight, my father had become a poor man.”

A series of tragedies

To add to their trouble, Bharti’s younger brother met with a terrible mishap. When Bharti was in the 4th standard, her brother fell down from the top of a five-story building and suffered from severe injuries, going into a coma for a year. “It was terrible,” Bharti recalls.

“He was only one and a half years old. The right side of his body was badly damaged, and he continues to suffer from it even today. All the savings my father had made over years of business went towards his medical expenses,” she says.

Bharti’s family shifted to a single room apartment in a simpler locality. The only thing her family didn’t compromise on was Bharti’s education, with her continuing her studies at the Saint Lourdes High School, a reputed school located in the Mathikere area of Bengaluru.

When Bharti was in the 8th standard, her father met with a road accident. As a consequence of this, he suffered from cataract and had very poor eyesight. It was Bharti’s mother, an uneducated woman, who then rose to the challenge and started selling ice cream to support the family. Bharti helped her mother, while at the same time managing her studies.

It was at this time of dire need that their relatives back in their hometown of Jaipur stood up in support. They asked Bharti and her family to shift back to their roots. “The cost of living in Jaipur was much lower, and we knew people there,” she says.

Shifting back to Jaipur came as a big relief, and Bharti’s mother started stitching falls in sarees to support the family. Bharti used to help her mother, and they collectively made Rs 10 per saree. Seema, a woman who lived in the neighbourhood, taught Bharti how to apply mehandi, for which Bharti received Rs 25 per person. Bharti started visiting functions during weekends and applying mehandi to help her mother make ends meet.

That year, Bharti failed her exams. She was in the 9th standard, and was devastated. “I realised how important education is, and decided never to compromise on my studies. I continued supporting my family while making sure that I had enough time to study,” she says.

Working her way up

After she finished her schooling, Bharti joined the Rajasthan University and undertook a graduation course in commerce. However, when her mother was struck with paralysis and her brother suffered from frequent fits, Bharti had to take up a job. She recalls,

“I was placed in the lingerie section at the Sagar Departmental Store, the first supermarket started in Jaipur. I was a teenage girl, and was very uncomfortable doing it, but it paid well. I even faced sexual abuse and advances from customers and other male staff members.”

Bharti soon joined Database Associates, a startup that helped banks start their ATMs. Working for the startup helped Bharti immensely in improving her confidence level and presentation skills. She used to make phone calls and database entries for the company.

It was the year 2000. Bharti saw an advertisement in the Rajasthan Patrika, a regional newspaper, which said that the newspaper was looking for regional coordinators. She applied, and was the only non-MBA graduate to make it through. Bhart says,

“I was also the only one in the team who didn’t know how to operate a computer. I requested 15 days of time from my boss and learned Word, Excel, and how to make presentations, all by myself, at an internet café near my place. I have no one to thank but Google. I had learned typing, and that helped me gain speed during the learning process.”

In 2005, Bharti joined another newspaper, Dainik Bhaskar, as an Assistant Manager. After a short stint there, she moved on to join Vodafone (then Hutch). Her salary was by then Rs 15,000, and she now had enough money to support her family and put away some savings as well.

Bharti and Bhuvanendra got married in 2008. “It was my mother-in-law who stood by us and got us married. My father-in-law was against the marriage until the day of the wedding,” she recalls.

That year, Bharti also helped her brother find a job at a government kiosk that sold plastic bags. Their father, who despite his disability was now self-sufficient and could live with greater dignity, worked with him to help him understand basic mathematics and calculations.

Giving back to society

In 2012, Vodafone came up with a World of Difference programme, where employees could volunteer for social causes. Bharti, now doing well with her family, felt an urgent need to give back to the society. “I know what struggles people at the bottom of the pyramid face, and wanted to do everything I could to help them,” Bharti says.

That year, she left Jaipur on her own for the first time. She visited Mumbai with the Vodafone team and worked with Salaam Balak Trust, an NGO that helped street children in the bourgeoning city. Bharti recalls,

“Unlike other volunteers, I was totally engrossed with these children. They were like my family. I have sold balloons with them at Chowpatty and had food with them in slums. When my mother and mother-in-law visited me in Mumbai, they were very proud of what I was doing.”

That same year, both her mother-in-law and her mother passed away in a span of three months. Losing the two women who were her biggest support was not easy for Bharti, and she went into depression. Bhuvanendra left his job to stay with his wife and son, and did everything humanly possible to help Bharti fight those dark days.

Bharti was determined to help the poor, as that was the only thing that made her happy. She started working with underprivileged children of Jaipur, and trained them in education and vocational skills. She says,

“During those days, I met a girl who had been facing abuse from a family member and didn’t know how to go about the situation. I encouraged her to speak up and fight back. She did, and her relative received a good thrashing from her father. It was after this incident that I realised how deep rooted the problem of sexual abuse was in our society.”

Bharti started Mission Jagriti, under which she started visiting schools and colleges, conducting workshops and making girls aware of the problem of abuse and counseling them to fight against it. “I was shocked with every new case. I studied psychology and spoke to doctors to ensure the girls received the support they needed in a conservative society like ours,” Bharti says. Till date, over 17,000 girls have been a part of the programme.

Bharti also started to speak to these girls about menstrual hygiene, and started Praveen Lata Sansthan, named after her mother and mother-in-law, the two women who supported her the most. Under the Sansthan, 90 underprivileged girls currently receive education, vocational and computer training in the basement of her house in Jaipur. Bharti says,

“Everything runs on a voluntary basis. All these girls receive menstrual pads, which are donated via our Facebook page. The teachers who train them join us voluntarily and do not charge anything. We are now creating courses and making things more formal and organised.”

Bharti has won numerous awards at her organisation, including the Women in Red award, the highest award given away by the company. Bharti was selected as an Ambassador for the International Girl Rising Campaign launched by Michelle Obama, the first lady of the US.

For her exemplary work and struggle, Bharti was also selected as one of the 100 Women Achievers of India, an award given to her by the Union Ministry of Women and Child Development in collaboration with Facebook. The award with given to her by Pranab Mukherjee, the President of India.

Currently, Bharti and her husband are running a campaign to sensitise men towards the issues women face in Indian society. The campaign, called Respect SHE (Solicitude for Her Esteem), has already received support from over 2,500 men, who have posted on social media their pictures with handmade posters showing their support and respect towards women.

Bharti is one of the participants at the Jagriti Yatra 2016, and is making many new friends during her journey across India. Since her 2012 Mumbai visit, this is the second time she has left home all by herself, and she believes that with more collaboration, support, and hard work, Indian society will become safer and more sensitive towards the problems of its women.